How often have you dreamt of owning a little house surrounded by the beautiful Tuscan landscape? Today we are visiting Asciano, a little hamlet in the heart of the Crete Senesi whose history goes back centuries ago and can still be perceived from the perfectly-preserved monuments.

An industrial-pop style home hides behind the Renaissance façade of a building near the centre. It’s a sort of secret building made over in a modern key.

The owner, Diego Magini – who took care of the renovation of this family home that dates back to the 15th century –  escorts us on our visit.

Before & after: from the 50s to an industrial-pop style

Movie mementos, exposed brick walls, raw materials and colourful finishes: if we should want to sum up the design of Diego’s home in just one style we could define it as industrial with some pop influences.

As usual, we can start from the entrance. You can start to feel the character of the whole project right from here: the plaster gives way to the house’s original walls while we walk along the corridor into a large room that is also a studio. 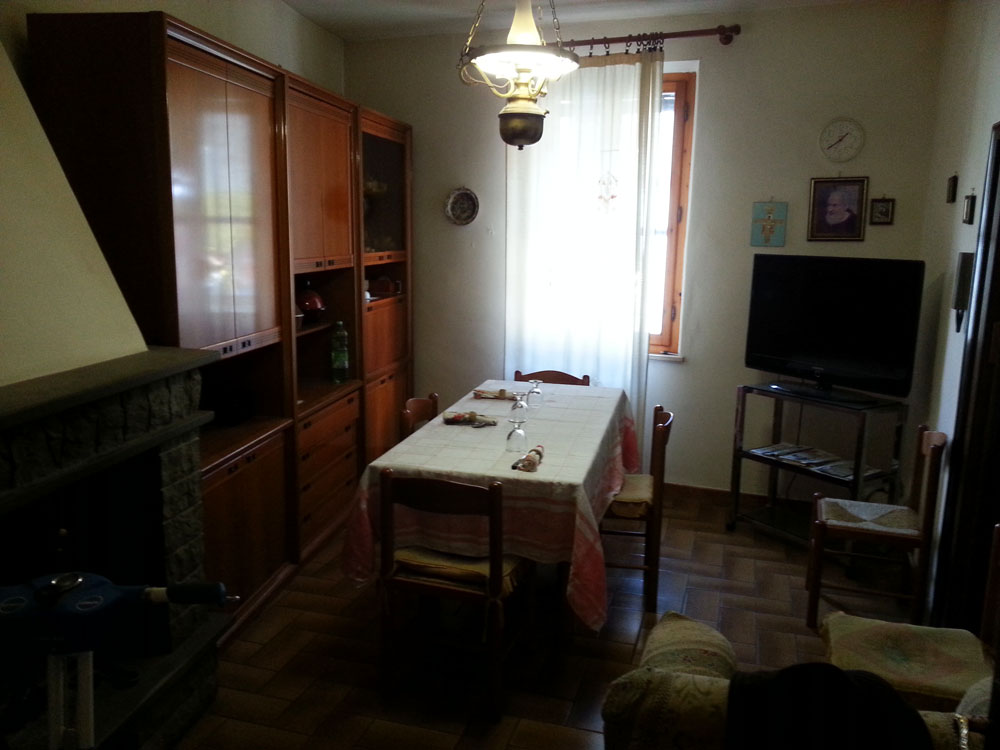 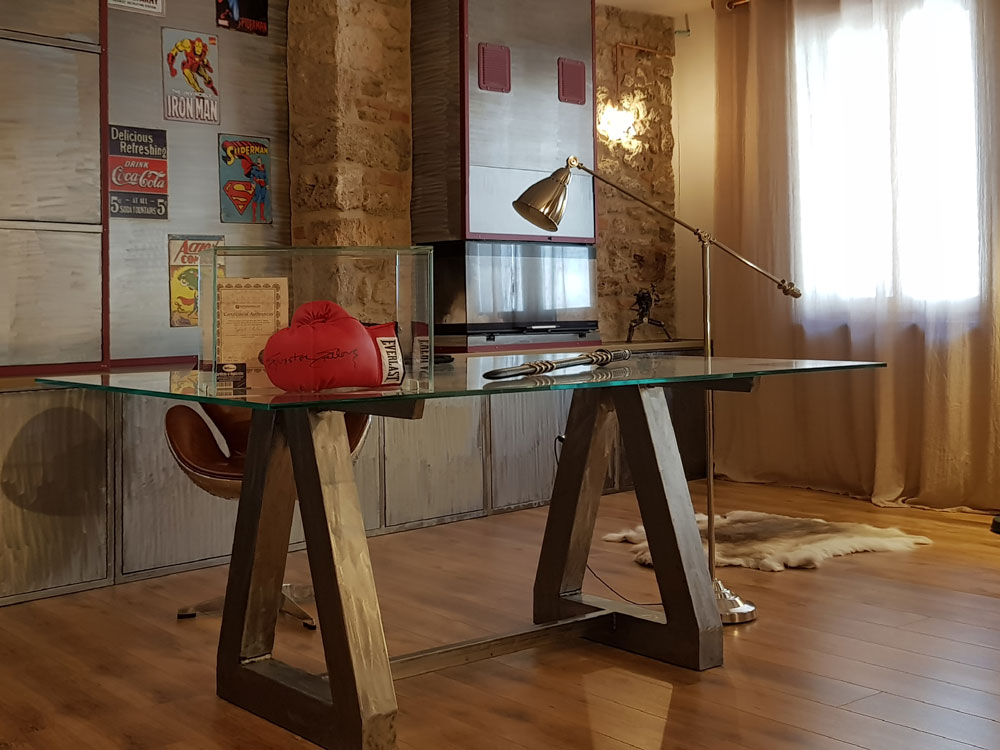 The old, dim kitchen is now bright and spacious and has become a modern studio in which every detail is accurately finished.

There are three absolute stars in this room: a natural-sized statue of Iron Man, a boxing glove used (and autographed) by Sylvester Stallone during the film Rocky and the fireplace, finished with the same colours.

The chosen heating appliance is Ecomonoblocco S78 3D Palazzetti featuring a panoramic view of the fire on three sides.

The fireplace has been installed on a reinforced concrete base anchored to the wall to prevent it weighing to much on the floor below. Afterwards, two stone walls were built to flank both sides of the fireplace, giving the impression that a specific niche was created to accommodate it in the original wall.

Another illusionary touch was created by making the sheet metal of the cabinet and fireplace look as if it were set in the stone. 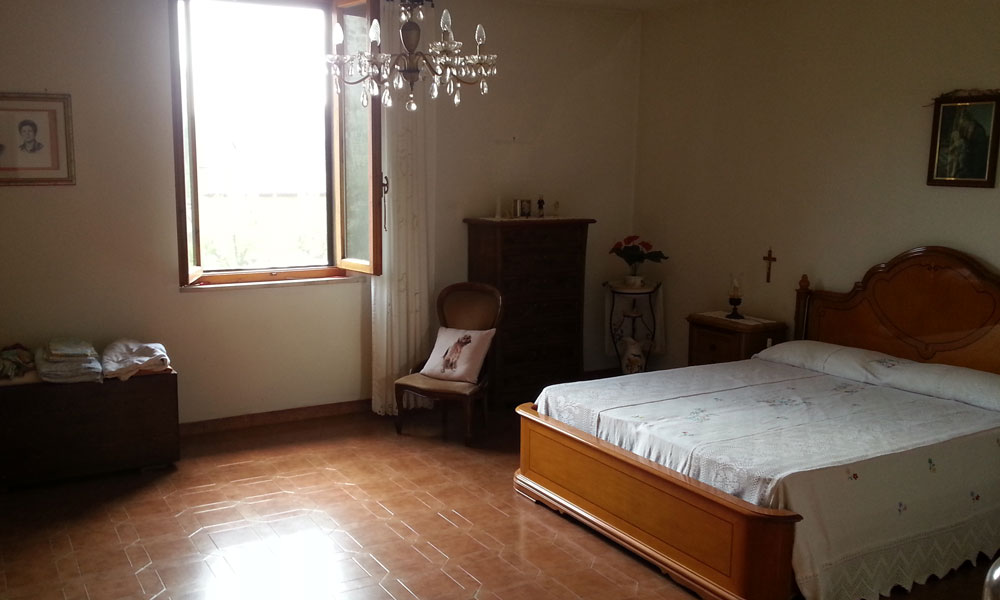 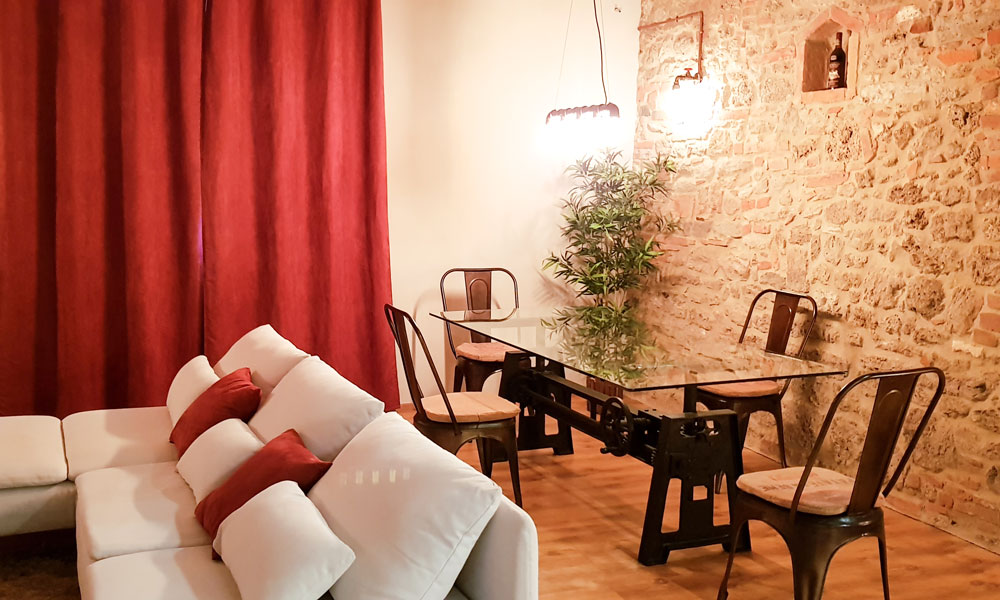 We walk from the studio to the reception area, an open space where there used to be two bedrooms and a storeroom that have now become a living room and a kitchen.

There are coarse and industrial-style materials everywhere:  copper trims on the fireplace and lighting (recreated using piping and taps), iron on the chairs and cast iron on the table.

The bedroom and chill-out area

The most intimate area of the home is in the same industrial style of the other rooms, especially as far as materials are concerned.

The ceiling has been replaced by an intermediate glass floor to chill out on:

And the old kitchen has been transformed into a jungle-style bedroom: 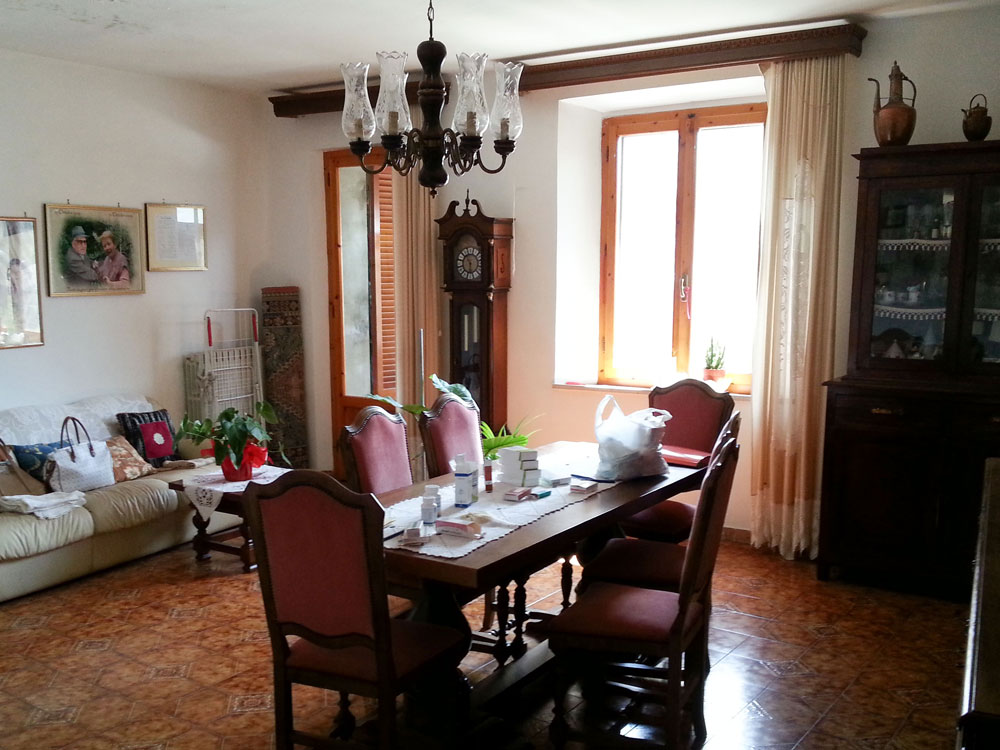 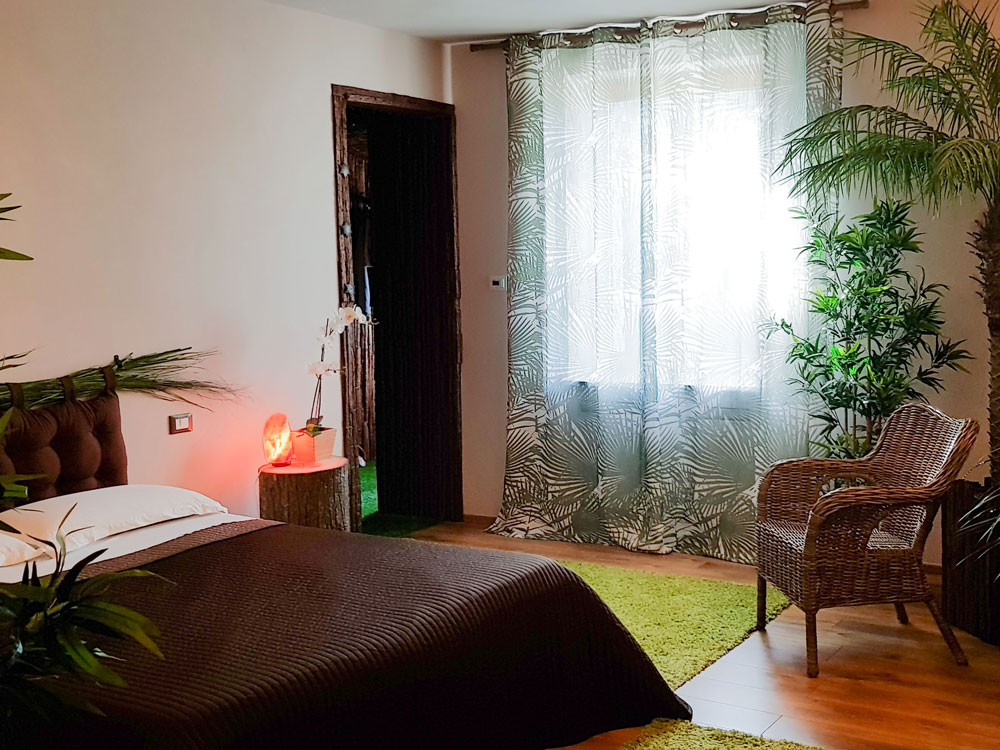 In fact, the small terrace adjacent to it is now a walk-in-wardrobe that recreates a jungle inside the bedroom. There is real tree bark on the walls! 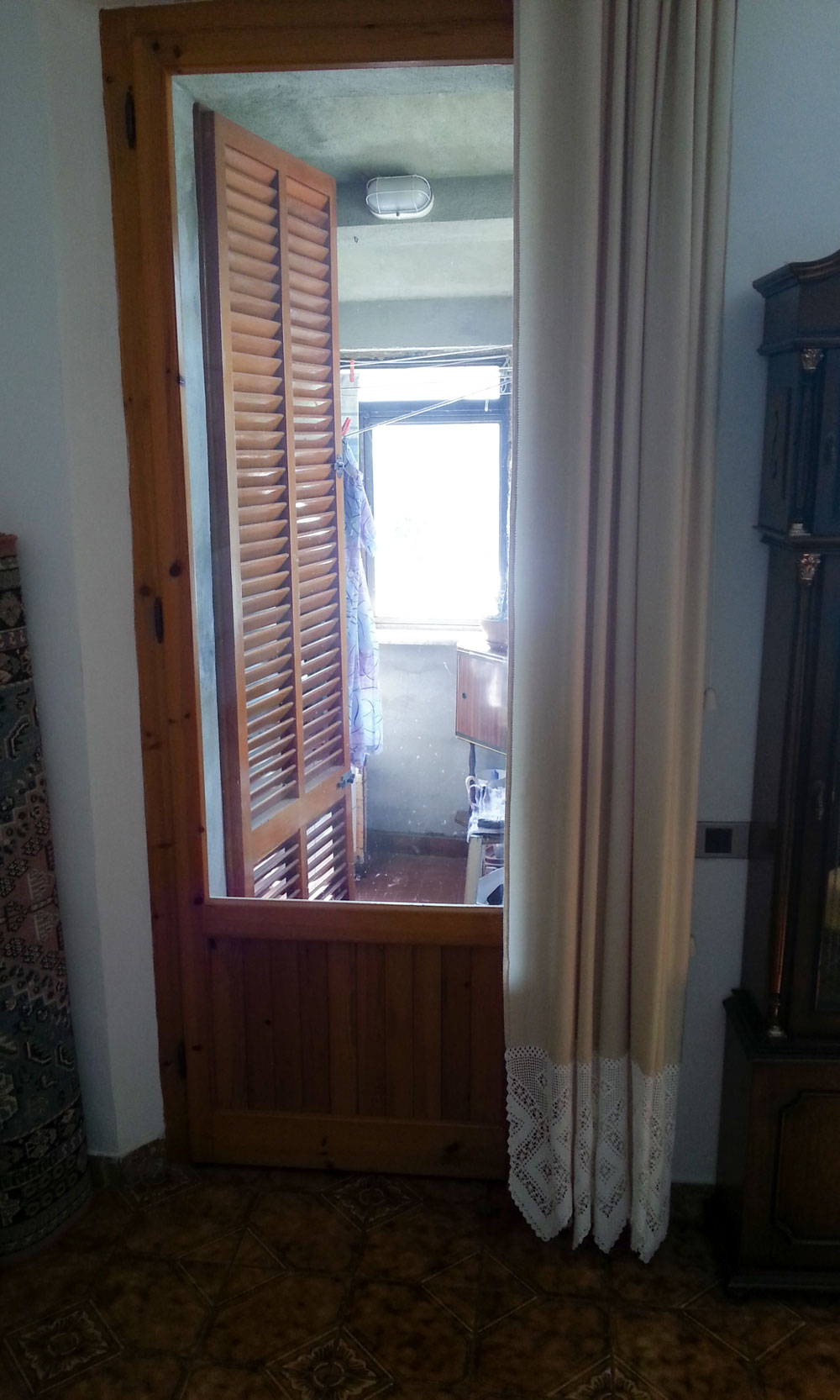 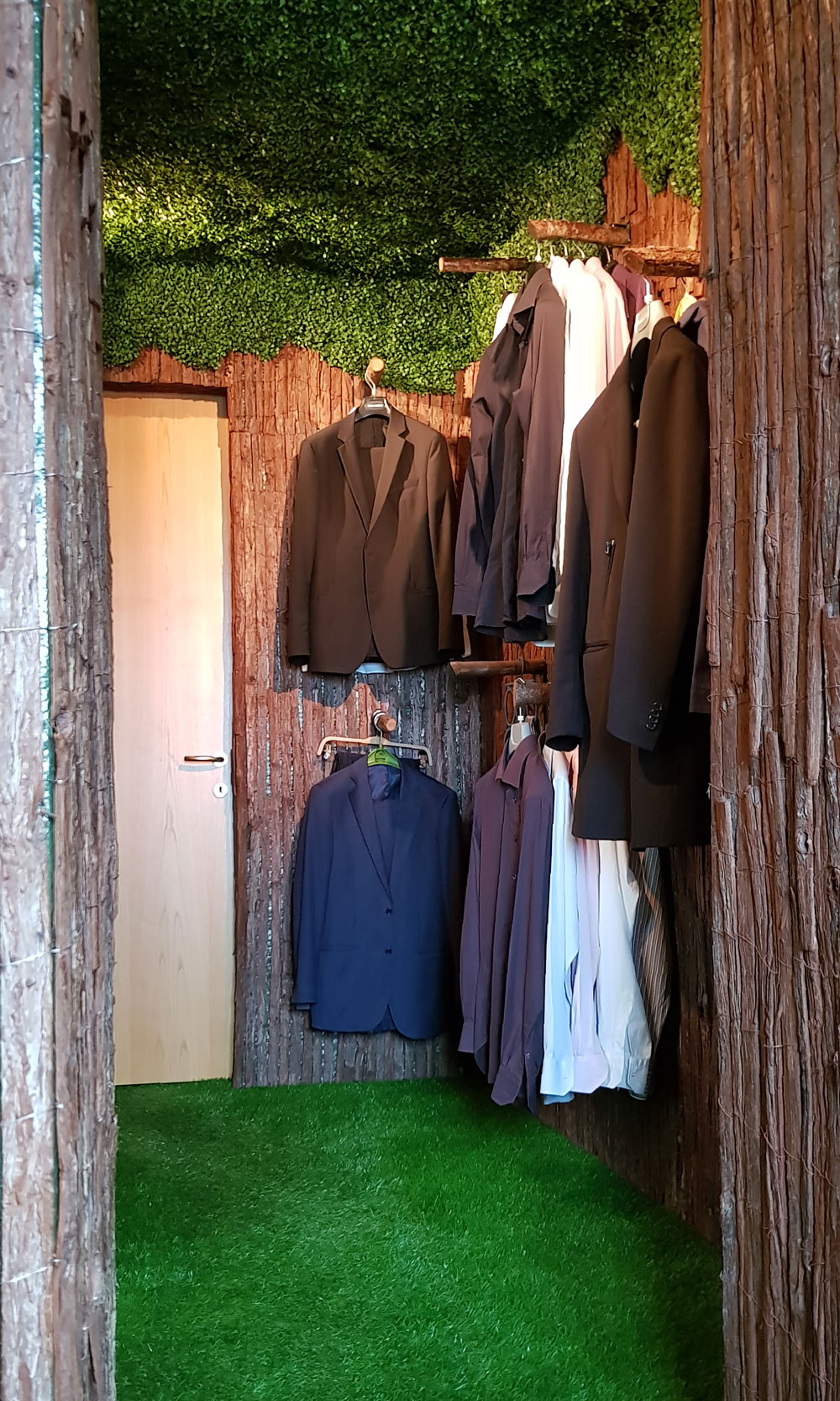 Would you like us to publish your project?  Write to us!